History of Gateshead Art Society and The Shipley Art Gallery
The Gateshead Art Society was formed by a group of artists in December1947 under the presidency of the curator of the Shipley Art Gallery, G.Nevin Drinkwater. The Society was, and still is, based in the Gallery workshop where members meet once a week to produce their art. Their work is shown at the annual exhibition which is held in the Gallery, the first of these being held in October 1948, when eighty five paintings were shown. 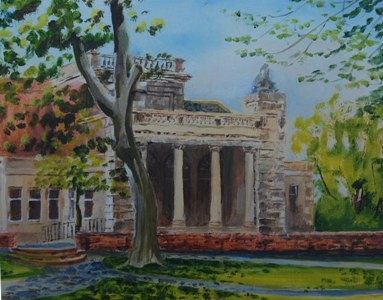 The Shipley Art Gallery opened to the public in 1917. This was made possible by a bequest from wealthy local solicitor and art collector, Joseph Ainsley Davidson Shipley (1822–1909).
Shipley was a rather enigmatic person about whom little is known. He was born in Gateshead, near High Street. He was a solicitor in the Newcastle firm of Hoyle, Shipley and Hoyle. From 1884 until his death, he leased Saltwell Park House, now known as Saltwell Towers, Gateshead.

Shipley’s main passion was art and collecting paintings. He bought his first painting when he was sixteen and by the time he died he had amassed a collection of some 2,500 paintings.

On his death, Shipley left £30,000 and all his pictures to the City of Newcastle, which was to build a new gallery to house the collection. This was to be known as "The Shipley Bequest". His will specifically excluded the Laing Art Gallery in Newcastle from benefiting from the bequest, and this clause became the subject of much public discussion, and eventually led to Newcastle's rejection of the bequest. It was only following this that Gateshead Municipal Council was offered the collection. As it was impossible to house all of the paintings, 359 of the pictures recommended by the executors of Shipley's will were selected. A further group was then added by the Gateshead Committee, bringing the total to 504.
In 1914, after the sale of the remaining paintings, work began on the new art gallery.

The building, which was designed by Arthur Stockwell, M.S.A. of Newcastle, opened on 29 November 1917. The stone entrance portico is distyle in antis – four Corinthian-style stone columns flanked by solid pilasters. These are surmounted by two sculptured figures, one representing the Arts and the other Industry and Learning, by W. Birnie Rhind, R.S.A. of Edinburgh

The original 504 paintings represented all the main European schools from the sixteenth to the nineteenth centuries. Since 1917, the collection has been added to, and now comprises some 10,000 items. William C. Irving's painting, "Blaydon Races" captures the spirit of the traditional Blaydon Races, and takes pride of place at the gallery. The gallery also holds a strong collection of 16th and 17th century Dutch and Flemish paintings, as well as 19th century British works, watercolours, prints, drawings and sculpture

Since 1977 the gallery has become established as a national centre for contemporary craftwork. It has built up one of the best collections outside London, which includes ceramics, wood, metal, glass, textiles and furniture. In 2008, the Shipley opened its Designs for Life gallery which showcases the gallery's collections of contemporary craft and design. The Gallery also hosts a varied programme of temporary exhibitions and has a strong partnership with the V&A Museum in London.
The Shipley is also home to The Henry Rothschild collection of studio ceramics. This includes work by all major makers and studios working in ceramics during the 20th century in the UK

The Shipley Art Gallery is managed by Tyne & Wear Archives & Museums on behalf of Gateshead Council.