Exhibition Reports and other Archival Information
2018 Exhibitions
We had two exhibitions in October through to December 2018 featuring up to 140 paintings between them -all works by artists of the North-East.The Annual Exhibition at The Shipley Art Gallery ended on 22nd December 2018.
The other 2018 exhibition was our delayed Summer Exhibition which was held in October! That was at St Mary's Heritage Centre Gateshead near The Sage.

The 70th Anniversary Annual Exhibition -17th Nov. 2018.
The Exhibition was opened by the Deputy Mayor of Gateshead Cllr Rachel Mullen. The proceedings were led by chairman of the Society Allan White in front of a large audience of invited visitors. Julie Milne the head curator of art galleries at Tyne and Wear congratulated the Society on its continued contribution to the Gateshead art scene and the quality of it's work. 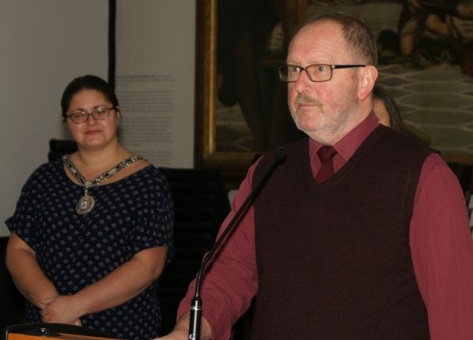 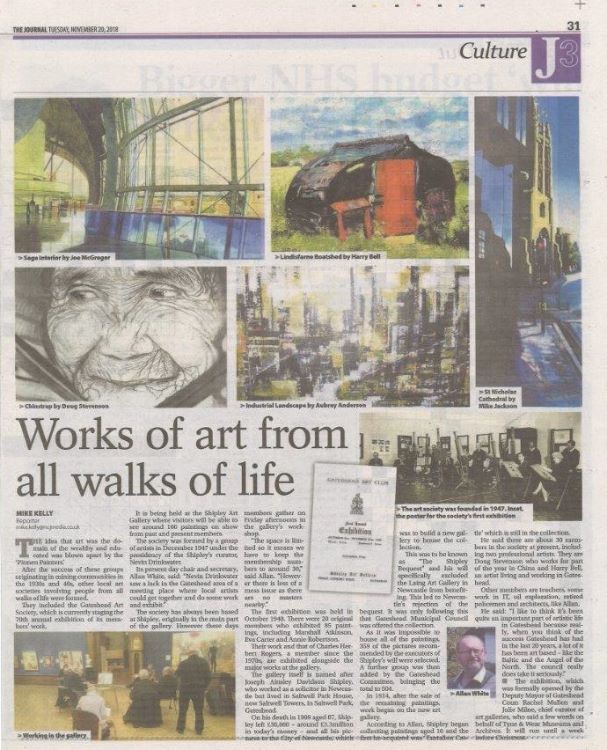 A full page spread in The Journal, Newcastle on Tuesday 20th November was given over to covering our Anniversary Exhibition. The article quotes Allan's Society and Shipley history researches and features the work of (clockwise from top L above) Joe McGregor, Harry Bell, Mike Jackson, Aubrey Anderson and Doug Stephenson. 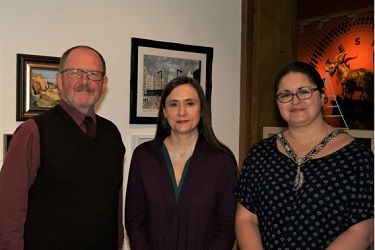 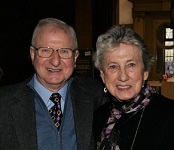 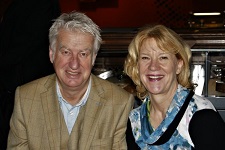 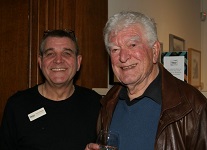 Christmas Party
The members' gathering at the Shipley just before Christmas enjoyed food, drink, quiz (from John) and a Secret Santa. The group voted on art work subjects set in November and December and the awards went to Jenny for her interpretation of John Fulthorpe's set photograph - "Lake District" and to Margaret for the "Dickens Scene".
The winner of the "Peoples Choice Award" at the Annual Exhibition was announced and Aubrey Anderson received the inaugural trophy for his painting "Fossil Fuel".

The members paintings were displayed, not on the gallery walls as usual but on easels arrayed at one end of the main gallery. Twenty one paintings were chosen for this area the rest were arranged in the side gallery on tables and seats, far from ideal.

The work displayed on the easels will be removed after one week and replaced by other paintings. In this way all members work will be displayed in the main gallery at some time.
Several sales were made on the day which is very encouraging however attendance was lower than in previous years.
JF. 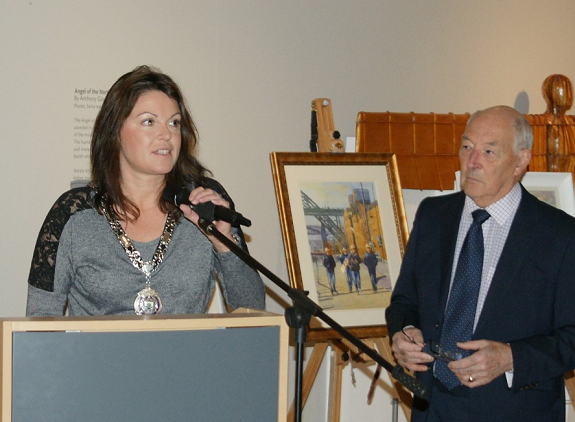 The 2016 annual exhibition of the Gateshead Art Society was opened at 11:00 on 12th November at the Shipley Art Gallery, where 80 works adorned the walls of gallery C.

The proceedings were opened with a welcoming speech from Helen White, the senior manager of museums from Tyne & Wear Museums and Archives service. This was followed by a short speech from Allan White, the Chairman and Secretary of the Art Society who thanked the T&WMA and particularly the staff at the Shipley for all their help in mounting the exhibition. He noted with sadness the passing of John McNally who had filled the role of Chairman for many years.

The mention of the Gateshead Art Society achieving second place in the Art Club of the Year 2016 Award received warm applause from the large audience, particularly in view of the size of our Society compared with the opposition (see below).
The exhibition was formally opened by Cllr. Allison Liderton-Thompson following the awarding of the Highly Commended prizes to Aubrey Anderson, Tim Griffiths and Karen Stott.

Nearly 200 visitors enjoyed the exhibition on the first day and it continued to be enjoyed to it's conclusion at the end of January 2017. This coincided nicely with the start of the Shipley’s Centenary year, which also coincides with the 70th anniversary of the formation of the Gateshead Art Society. A total of 23 of the 80 paintings exhibited were sold.

Gateshead Art Society were judged by international artist Hazel Soan as joint runners up in the "Art Club Of The Year" competition which was held at Patchings Art Centre, Calverton, Notts. The competition was hosted by The Artist Magazine and sponsored by Jackson Art Supplies. The Society's winning paintings were featured in The Artist and in Leisure Painters magazines.

About a hundred art clubs took part, the top ten clubs were selected to display their work at Patchings Art Centre, where the final judging took place. Fifty paintings were exhibited as part of a four day festival of art that is an annual event at Patchings Art Centre.
Leicester Sketching Club were the winners and Guildford the other runner up.
Presentation 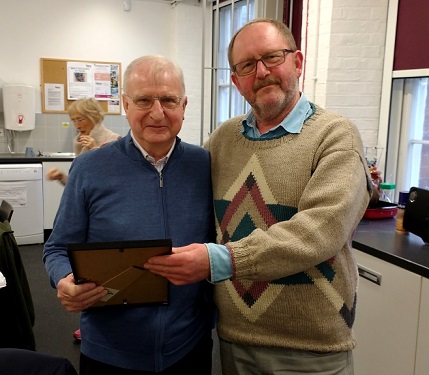 Society Chairman, Allan White, presenting a Life Membership certificate to Joe McGregor in recognition of his work for the Society as secretary, member and artist over many years.
Joe and his partner Irene recently resigned from the Society having moved away from the area. The certificate was presented at the Christmas Party on December 23rd 2016
Photo J Fulthorpe 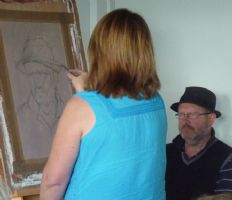 On the 25th September 2015 Clare Money was again at the Shipley Art Gallery. This time Clare was asked to demonstrate painting a portrait using pastels. As can be seen left, Clare painted an excellent portrait of Society Chairman, Allan White. While Clare was painting she gave a running commentary describing the methods she uses when painting with pastels.
photo J McGregor 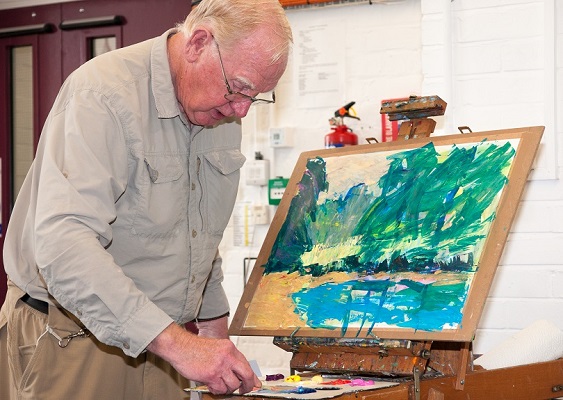 Proceedings were started by Helen White, Head of Museums, Newcastle & Gateshead who after a short speech handed over to Gateshead Art Society Chairman John McNally. After thanking Helen he introduced the Mayor of Gateshead, Councillor Neil Weatherley and his wife Mrs Lynne Weatherley. Before opening the exhibition, the Mayor who had earlier had a preview of the exhibition, praised the high standard of the exhibits. Society chairman John McNally then asked The Mayor to present certificates to three members of The Society who's work had been highly commended.

The Exhibition opened on Tuesday 1st July 2014 until Tuesday the 5th August 2014.
On display were a selection of paintings by members of the Art Society within this historic setting. The
Society is based in the Shipley Art Gallery where they have an exhibition every November & December.
Both exhibitions offer works for sale.

Due to a major national touring exhibition being held in the Gallery for the latter part of 2009, the Art Society exhibition took place in February and March 2010. It was opened formally on the 13th February by the Mayor of Gateshead, John Eagle, who went as far as to buy one of the paintings. The exhibition attracted a large crowd that day and the public visitors to the gallery continued to enjoy the display for the duration of the exhibition.

There were 113 works of art displayed and 47 were sold - a very creditable performance to all concerned.
The 2010 exhibition will take place in the Shipley Art Gallery from 20th November 2010 until the 9th January 2011.
Next
Previous